Commissioning of 27 studio’s in Nijmegen

The transformation of the former Printing Office took five years in total. In 2013, the project was initiated within HERMON Heritage, together with the neighboring former Belgian Consulate (Parkweg 96). Work is currently underway on the latter national monument.

The former Printing Office and the 8 new-build studios are located in the inner area between the buildings of Parkweg, Pijkestraat and Lange Hezelstraat and can be accessed via an alley on Pijkestraat. 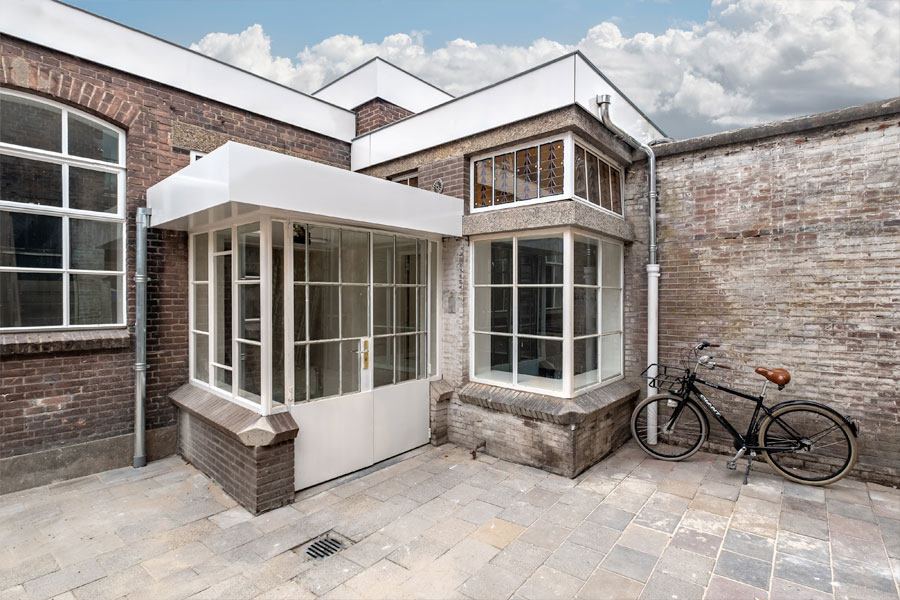 The former Printing Office was built in 1911 and designed by architect B.J. Claase. He was mainly active in Nijmegen and designed the store with upper house at Molenstraat 40-42 (1895) and the Catholic St. Jozef church at Keizer Karelplein 19 (1907-1909). The Printing Office of the brothers Janssen has been adjusted several times over the years. The characteristic stained glass windows are probably from the Nijmegen architect Charles Estourgie. It is know that Estourgie had a preference for stained glass windows and that he introduced the architectural movement of the Amsterdam School in Nijmegen. Although this architectural movement is less visible in the architecture of the building, it is recognizable in the stained glass windows. Among other things, the color combinations and design refer to this.

The characteristic entrance of the former Printing Office, which is hidden behind the buildings of the Pijkestraat, was realized in 1933. The design is a mix between the architectural styles of the Amsterdam School (stained glass windows) and functionalism / new objectivity. The latter is an architectural movement that believes the construction and appearance of a building must be determined by its function. The style is characterized by the frequent use of reinforced concrete, steel and glass.

The special characteristic elements of the buildings have been taken into account during the redevelopment. All stained-glass windows in the former Printing Office have been preserved and the characteristic entrance, which was neglected, has been restored. All studioshave their own bathroom, toilet and kitchen. The 8 adjacent new-build studios also have their own kitchen and sanitary facilities. The new-build studios are designed in a style that matches the neighboring Former Belgian Consulate and the Former Printing Office. They are of a functional contemporary design with a lot of glass window surface. The studios have been commissioned to the tenant Stichting Veste and transferred to insurance company BOVEMIJ, the investor of this project.

We give a future to the past HERMON Heritage